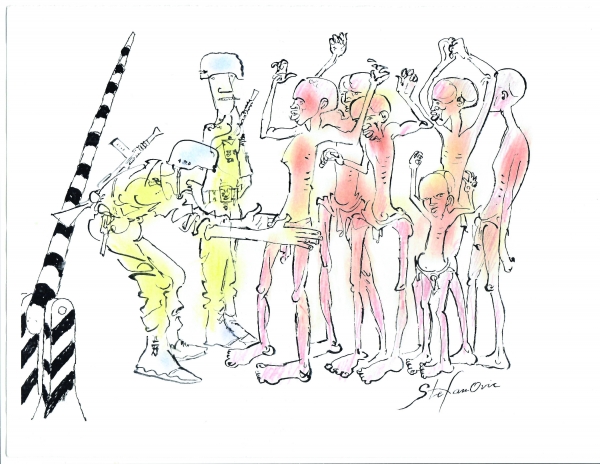 Jury of the XXI International Salon of Anti-war Cartoon "Kragujevac 2021" composed of: Massoud Shojai Tabatabai, cartoonist, director of the Iranian House of Cartoon in Tehran, president, Jugoslav Vlahović, cartoonist, illustrator and designer, Professor Spiro Radulović, cartoonist, Toso Borković, journalist and cartoonist , President of the Salon Council, members, met in Kragujevac on August 21, 2021 and stated that 987 works by 469 authors from 47 countries from all continents arrived for the XXI Salon. Reviewing the submitted works, the Jury selected 80 caricatures for display and publication in the catalog of the Salon, as a sign of symbolism on the 80th anniversary of the crime in Kragujevac, and decided:

GRAND PRIX "SYMBOL OF PEACE" AND THE MONEY PRIZE OF EUR 1,500 EUROS, donated by the International Association of Cities "Courier of Peace", receives Božo Stefanović, Bosnia and Herzegovina

THE GOLD PLAQUE AND THE FIRST PRIZE IN THE AMOUNT OF 1,000 EUROS receives Nikola Konstandinović, Serbia

THE SILVER PLAQUE AND SECOND PRIZE IN THE AMOUNT OF 800 EUROS receives Prawit Mongkolnowrut, Thailand

THE BRONZE PLAQUE AND THE THIRD PRIZE IN THE AMOUNT OF 500 EUROS receives Marzieh Khamizah, Iran

THE CITY OF INGOLSTAT (Germany) AWARD IN THE AMOUNT OF 500 EUROS receives Hikmet Çil, Turkey

THE AWARD OF THE CITY OF BIELSKO-BIAL (Poland) IN THE AMOUNT OF 500 EUROS Alireza Pakdel, Iran

THE AWARD OF THE CITY OF PITESTI (Romania) IN THE AMOUNT OF 500 EUROS receives Ramiro Zardoya, Cuba

THE CITY OF CARARA (Italy) AWARD IN THE AMOUNT OF 500 EUROS receives Hossein Solouki, Iran

The jury has decided to award the SALON DIPLOMA to the following authors, whose works were in the closest competition for awards: Zoran Petrović, Germany Çemil Safiturk, Turkey Pavel Matuška, The Czech Republic Vladimir Semerenko, Russia Goran Ćeličanin, Serbia

The jury, which included four famous cartoonists, former award winners at the Salon, and all four winners of prestigious cartoon festivals, from Bordighera, to Lisbon, as well as to Tehran, highlights the success of the XXI Salon, both in terms of the number of authors and works received, as well as the quality of the caricatures, thus testifying to the universality and, unfortunately, still topicality of the anti-war theme. Also, the fact that authors from all over the world responded to the competition, even from the very hotspots of today's wars and conflicts, speaks of the strength of the peace mission that the Salon promotes. The received works, especially awarded, depict all dimensions of war and suffering and their faces, using sarcasm, irony, ridicule, condemnation, compassion and questioning the limits of evil and good in man. The cartoonists on the works attached to the Salon testify to the dark side of today's world, but they do not agree with it, but judge it with the blade of their pen and undried imagination. The jury remained faithful to the preservation of the universal significance of the Salon and its sublime idea beyond any political, geographical, national, religious or ideological division. The works selected for exhibition and publication in the catalog of the Salon, especially the award-winning works, show an inspiring variety of expressions in condemning the war and warning of its fatality to people and the entire planet. Along with the idea, the selected works are also characterized by strong artistry. The jury points out that the Salon has once again confirmed itself as one of the most important anti-war events in Serbia and expresses its appreciation to Kragujevac for persistently nurturing and developing the Salon, gathering its partner cities around it and presenting the Salon in the country and abroad. At the same time, he was surprised to learn that this program did not find understanding and support in the competition of the Ministry of Culture and Information. 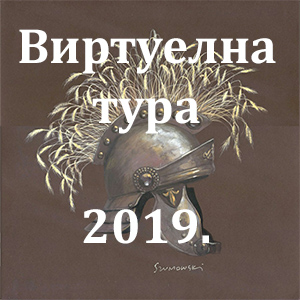